We went to Reese's birthday party last saturday. It was a lot of fun and I got to meet another mom from my message board! She was really nice and her baby is so cute! He's a big boy too, 28lbs already! Dawson is about 23lbs I think. Last time he was weighed was at 9 months and he was 20lbs. Here's a couple pics of Dawson and Jacob. 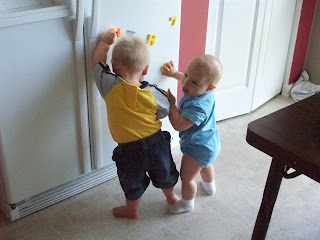 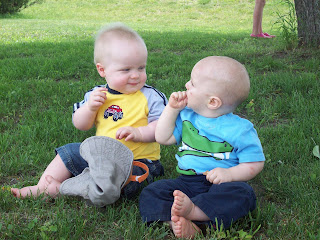 We went to the "Back to the 50's" car show last friday. Lots of cool cars there. We also picked up some tires that were on sale. Dawson thought it was cool to be put in the tires. He wasn't too sure about the 3rd tire though! 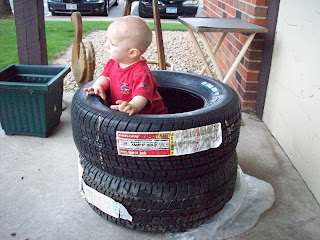 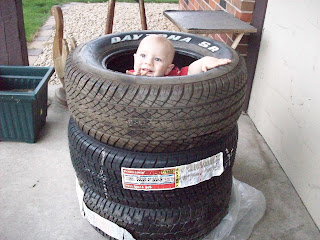 Got a new toy for Dawson on Craigslist! He loves the toys at the mall that you can climb on and through, so I thought he'd like this. Most of his toys are for younger babies anyway, so it's nice to have something he'll grow into. He's not big on the slide part yet, he mostly likes to crawl through the bottom and stand in the top. 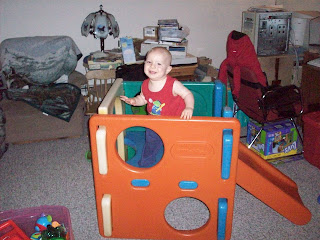 Posted by Stephanie at 12:55 AM No comments:

It's been a while since I've posted! We've had a cold off and on for a couple weeks. Just when we think it's gone, it shows up again!

We went to my sister Sarah's high school graduation last weekend. It went pretty good. Dawson got pretty bored, so we all took turns holding him. That lasted until the rest of the ceremony. The Open House went good too. He got a ton of mosquito bites though!

Today we went to a Chinese Buffet. Dawson is usually very good and quiet in restaurants, but today he decided to change that! He was quiet at first, but then he started babbling. After that he started squeeling and scrieking at the top of his lungs! It was so loud! Everyone in our section was looking at us! Luckily most just thought it was funny. His new thing is listening for an echo. If we go into a new place, he often lets out a yell. If it echos at all, then the really loud noise starts! He makes as much noise as he can until we leave the echo-y area. Makes bathrooms really "fun"! Often there's someone there waiting to see the cute baby who was squacking! Our meal ended up being free! Dan helped someone work on their car for 3 hours today, and refused to take money for it. The guy offered to take us out to eat, but he said we're already going somewhere. Apparently he told the guy where he was going, because he showed up and paid for our bill! That was nice of him.

Dawson and I went to a parade in my hometown on thursday. We met up with Jen, who I met on iVillage. She has 6 kids, including a baby Dawson's age. It was a lot of fun. I'm going to Reese's first birthday party next weekend! I can't believe our babies are almost 1!

Here's a pic of Jen holding Reese and Me holding Dawson.

One of the things thrown at the parade was this little beach ball! Dawson loved it! 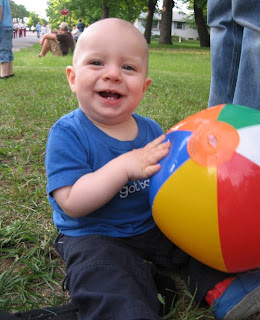 Posted by Stephanie at 11:28 PM No comments:

Went on a date

Greg called me this morning and asked if I still planned to come over. I had woke up with a horrible headache and sore throat and was feeling miserable. Not sure why, I'm fine now. Greg had a wedding to go to, so we just decided to do it another weekend. Probably not next weekend, since my sister's graduation and open house are that weekend.

Instead Dan decided to go out. We bowled 2 games, I lost both but not by much. Then we went out to eat at a nice restaurant for a change and had salad bar. It was a nice change from our usual taco bell! Dawson liked watching us bowl, he was really good all day. He even had some carrots and applesauce from the salad bar! He's starting to do better with little chunks of food. Before he didn't swallow any chunks unless they melted in his mouth.

Tomorrow we're going to Dan's parent's house. We haven't been over there since Dawson was 4 months old!

Here's some pics from last weekend when we went to Munsinger Gardens. After the gardens we followed the walking path to the park next to it. Dawson loved sitting on the stone wall. He really enjoys walks in the stroller and being out and about. 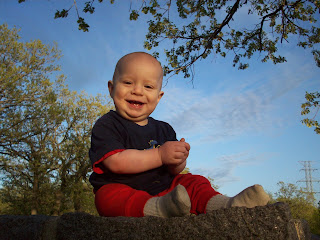 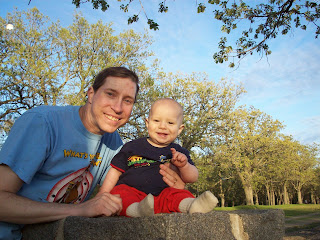 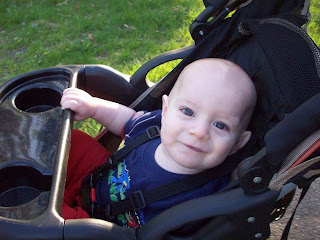 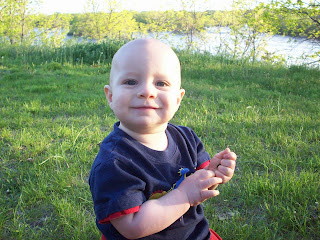 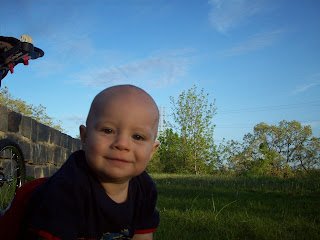